Buddhist wisdom is clearly expressed in the wealth of writings that comprise its accumulated learning and that demonstrate the keenness of its analytical discernment. Tsadra Foundation is committed to ensuring the best possible transmission of this wealth of knowledge and understanding through quality translations of important Buddhist texts and commentaries.

We are particularly interested in the translation of the core curriculum of the traditional college of studies, as well as texts that will benefit individuals who are actively engaged in the contemplative process.

In keeping with the non-sectarian approach of the Foundation, the texts selected for translation represent a variety of traditions and views.

At the present time we support translation into English and French.

The Treasury of Precious Instructions

Essential Teachings of the Eight Practice Lineages of Tibet 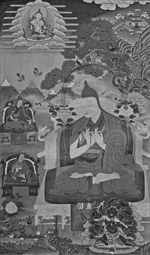 The Treasury of Precious Instructions by Jamgön Kongtrul Lodrö Taye, one of Tibet’s greatest Buddhist masters, is a shining jewel of Tibetan literature, presenting essential teachings from the entire spectrum of practice lineages that existed in Tibet. In The Treasury’s eighteen volumes, Kongtrul brings together some of the most important texts on key topics of Buddhist thought and practice as well as authoring significant new sections of his own.

From Sutra to Tantra

In honor of Lama Tharchin Rinpoche and with deep appreciation for his extraordinary kindness and generosity to a generation of Western Buddhist students, Tsadra Foundation is delighted to bring to fruition his long-held dream of making this seminal work available to English speaking students. The first volume comprising Books 1-10, Foundations of the Buddhist Path appeared in June 2015; a second volume comprising Books 15-17, The Essential Tantras of Mahayoga appeared in 2016. Book 13, Philosophical Systems and Lines of Transmission, and Book 14, An Overview of Buddhist Tantra, appeared in 2017.