A quick note on “Kānha: An Anomalous Siddha?” 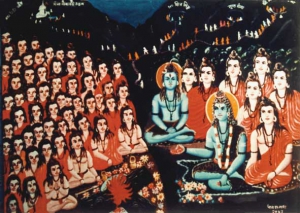 One of the few mentions of Tibetan sources at the Society for Tantric Studies Conference came from a young scholar at the University of Chicago who provided an interesting discussion of Kānha and the Grub thob brgyad bcu tsa bzhi’i lo rgyus. Samuel Hopkins noted that while most of the stories of the 84 Mahasiddhas follow a relatively strict format, Kānha’s story deviates significantly and he pursued this anomaly in his paper. If I understood correctly (I haven’t really read the story in Tibetan), unlike all the other stories, Kānha’s story begins later in his life-after initiation-and ends somewhat negatively with a warning about pride-Don’t be like Kānha. Aren’t we supposed to be impressed by the “greatness” of the Mahasiddhas? Not in Kānha’s case. It was interesting to hear that we have texts in which Kānha describes himself as grotesque, comedic, loathsome, detestable. Samuel Hopkins says that what he most certainly was was subversive. Kānha mixed comedy, criticism, and “serious” Buddhist teachings together in his own texts in such a way that his fame appears to come from his lack of decorum-his “crazy wisdom.” While we have many texts by various masters of the tradition, there are certainly few that are first person accounts of this kind. He may also have presented himself as a Hindu while secretly touting Buddhist teachings, or perhaps he was a member of a Hindu sect. The “anomalous Siddha” is actually claimed by more than one tradition, and while his texts may be by many different people writing under one name, what is so interesting is that despite his strange characteristics, sometimes seemingly at odds with Buddhist principles, his story remains a part of the grub thob and a part of Tibetan culture. The question is why, out of 84 stories of mahasiddhas, is this siddha the nail that didn’t get pounded in? Perhaps we shall hear more from this “other” Mr. Hopkins in the future.